The call came over the radio, Elvis Mathebula resident guide for Angela’s Safari Camp had picked up an Elephant bull at Big dam with a wire snare around his truck. Dawie contacted Colin and the motion to rescue the elephant began. 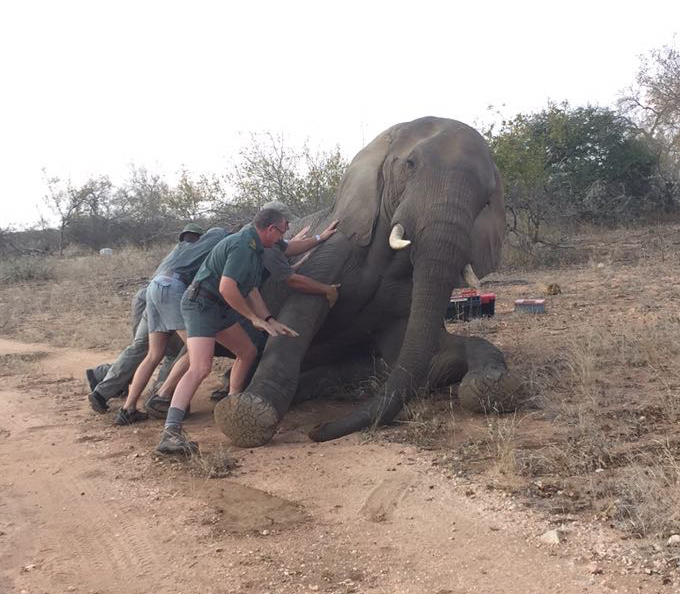 Mid morning Colin advised Dawie they had spotted the Elephant in a close proximity to the dam and that we were to meet him at lunch at the Klaserie River bridge. Hearts racing, fully of excitement off we went, not knowing what to expect.

Arriving at the bridge we spotted the Super pack of Wild dogs, 15 strong with the Alpha female heavily pregnant in the riverbed down below.. We secretly hope that they would be denning on our property as they had been in the area for just over 3 weeks.

A bakkie pulled in, Colin’s wife arrived with her daughter and the Rangers in another bakkie, shortly after the chopper could be heard overhead and landed, dust swirling, metres from us. The instructions and directions were given.. they were going to dart the elephant to drop close to a road and low vegetation area, vet on board we were ready to get the rescue underway!

We road off ahead of the chopper and waited at the meeting point, we watched the chopper manoeuvre above us and spotted the elephant in the distance, once darted the process to direct him to the demarcated area began. The chopper went to and frow, lower and higher moving the elephant into position where finally the drugs took effect and the elephant dropped to his knees. The chopper landed and everyone was on the ground.

It took all the men in the team to push the large elephant, they rocked him back and forth until he lay on his side. On closer examination it was noted that we the snare had been seen in time, we were relieved to see it had not yet cut into the elephants flesh. The elephant inhaled heavily and exhalation was difficult, the snare was definately hindering his ease to breath. A small twig was inserted into the tip of his trunk to keep it open whilst under the anaesthetic. We could only imagine the frustration this restriction on his wind pipe must have been. Colin removed his pliers and cut the snare, the elephant breathed a sigh of relief and the grass rustled under his deep breathes out. The rhythmic grumbling from his breathing was very relaxing, like a gentle giant snoring! The chopper pilot was first to sit between the elephant’s neck and trunk and posed for a photograph, my heart raced! Having been petrified of elephants my entire life after a bad experience in Kruger National Park I did not want to get too close. I reached out and touched the elephant’s skin, it was spiky and the hairs covering him were like thin strong pieces of wire. He was covered in clumped up mud and his skin was rough to touch. I felt his skin several times and nervously made my way to his head area to have a photo. I mustered up all my courage and knelt in the crevasse resting my hand on the elephant’s chest. I couldn’t believe I was actually touching a real life elephant, never could I have imagined in my wildest dreams I would feel safe enough to do this! I examined his face up close and his Jacobs organ was visible, I noted the texture of the skin inside his mouth, the extremely long thick eyelashes and the detail of all the wars his tusks had been in over the years! The experience was amazing to say the least!!! I ventures round and examined the thick rope like hairs of the giant’s tail, I had only ever seen jewellery made from these hairs. I placed my hand on the sole of his foot to get some perspective; they were massive to say the least! And rough, he definately needed a foot scrub!

Colin and the vet noticed an open wound high up on the elephant’s trunk, a possible branch injury or from a brawl with another bull. Thick yellow puss was oozing from it every time pressure was applied to the area. Treatment began as they flushed it out and applied some antibiotics. His overall health looked very good.
Before we knew it, they were administering the antidote into a vein behind the elephants ear. Janice made her way back to the Game Viewer and I felt it was my cue to follow suit, I was nervous to be caught unaware by a groggy, frightened ellie. Safely back in the game viewer, we heard the choppers engines start up. Seconds later the elephant was back up on his feet and made his way slowly off into the bush without even a second glance in our direction. It was a job well done by a very efficient professional team and we are thankful we had the chance to share in this magnificent experience, to rescue a Giant. 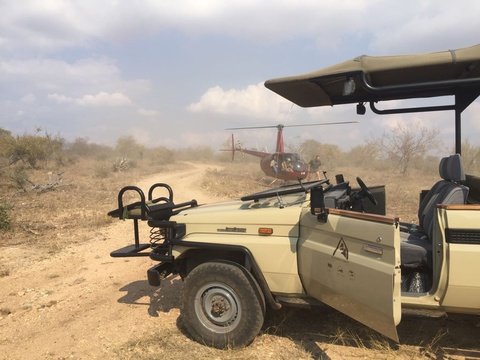 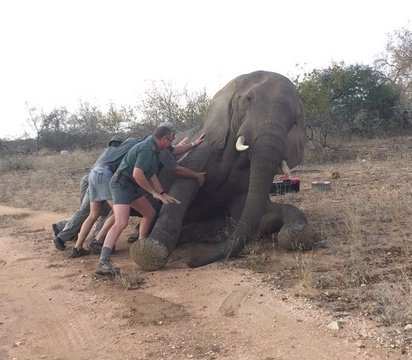 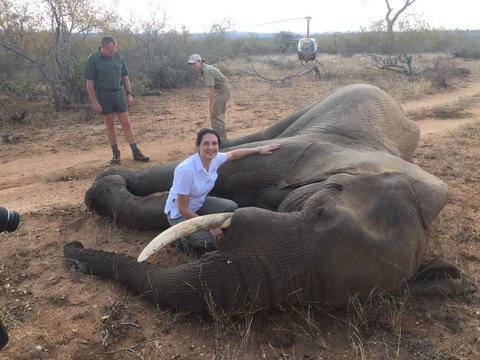 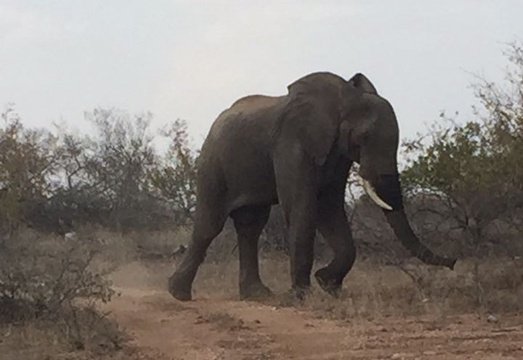