As the winter cold begins to bite, our early risers have been treated to some magical, mist-covered mornings as they head out on their sunrise safari. At Klaserie Drift, our guides love to take full advantage of this precious golden hour, where not only is the light fantastic for photography, but it’s also the time where our predators are most vocal - perfect for seeking them out before they settle for the day. Keep reading to find out which Klaserie characters have been making waves this month…

We are thrilled to see the newest additions to the River pride have been properly introduced to the pride, now often being found with their aunties and older cousins in tow. Despite this, one of the most special sightings of May was when guide Emily came across the 3 cubs stashed safely in a drainage line, patiently waiting for mom to return. The little cubs curiously approached the vehicle - giving our guests a thorough check - before returning to snuggles and play with each other. A heart-warming, bucket-list sighting for sure. 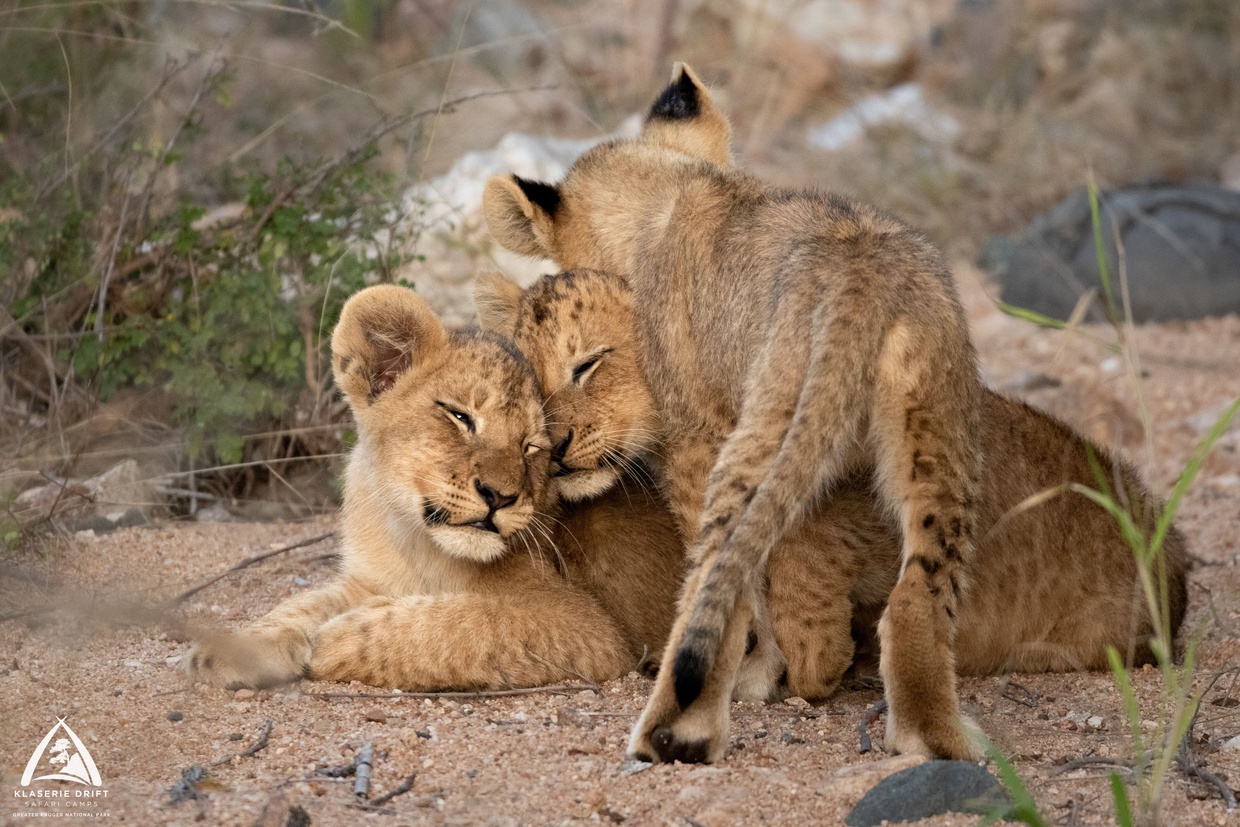 The three young cubs of the River Pride

The rest of the pride is still somewhat fragmented - with the main group varying between 14 and 17 members and a breakaway group of 3 lionesses occasionally joining forces with the 3 sub-adult males who are pushing into independence. Hosi and Socha are moving in ever-larger circles, their scarred faces betraying the many fights they have won to keep hold of their kingdom. On one particular morning, our guests were overjoyed to witness them fighting over the remains of an impala kill - an impressive affair! After an astounding 3 and a half years at the helm, we wonder how much longer can these impressive boys remain in control? For the sake of the newest cubs and the stability of the pride, we hope for a while longer yet.

Manzi and her two cubs have, once again, stolen the show this month - with several sightings of the trio by our guides. It is always an incredible moment discovering just one leopard on safari, so to find 3 at once never fails to thrill! Late one evening, guide Emily stumbled across an impala kill in a tree and, sure enough, Manzi and her cubs were spotted soon after, the latter high up in the branches and mom casually relaxing on the ground. The carcass kept the trio busy for over 2 days, providing many memorable moments for our guests. 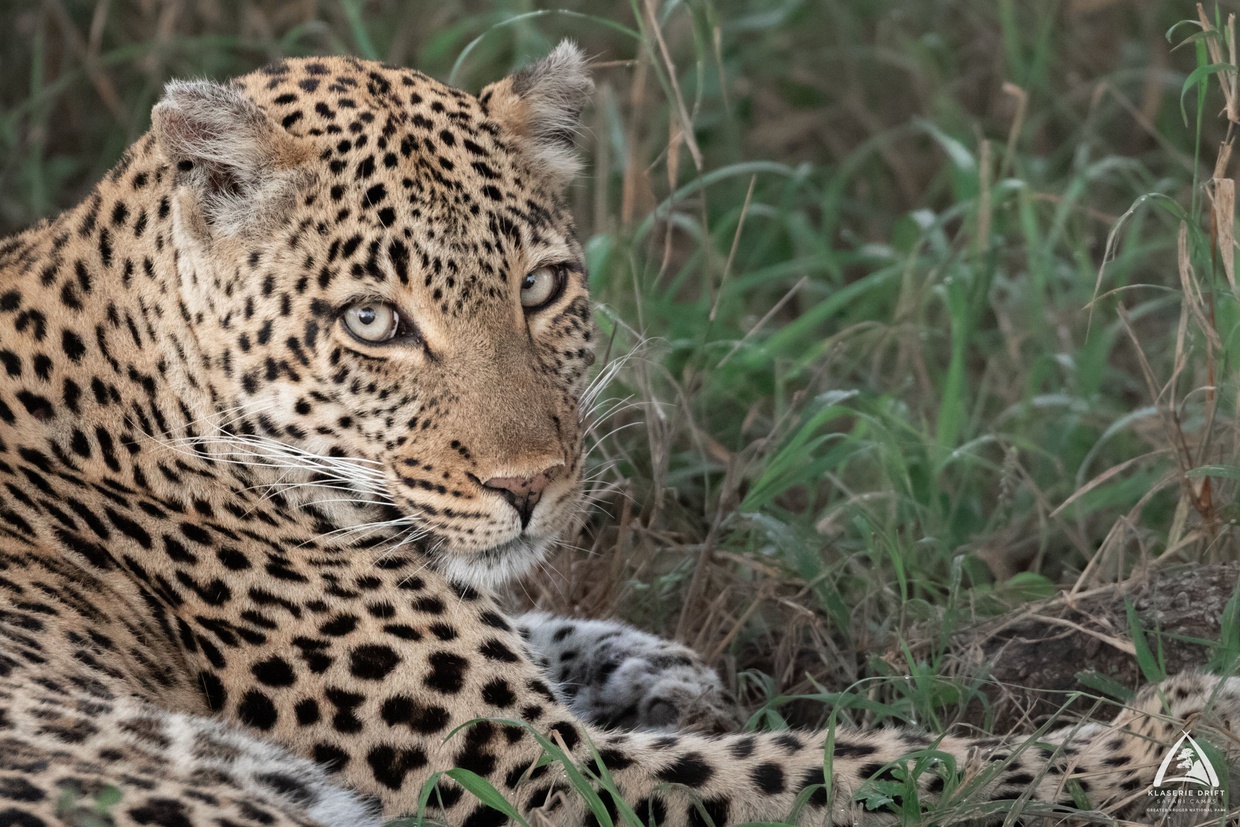 Mom Manzi taking some time out from the kids!

Saseka has been another standout character this month. Her injured leg now completely healed, she has been spotted several times patrolling her vast territory. One afternoon, guide Khutso was elated to find her relaxing in a tree with an impala kill nearby. However, her peace didn’t last long as the next day the experienced female somehow managed to lose the kill to the insatiable River pride. Khutso and his guests arrived to watch the pride fighting violently over the spoils, with a sombre Saseka perched in her tree for safety. Fortunately, she managed to escape some time later after the pride had moved on. 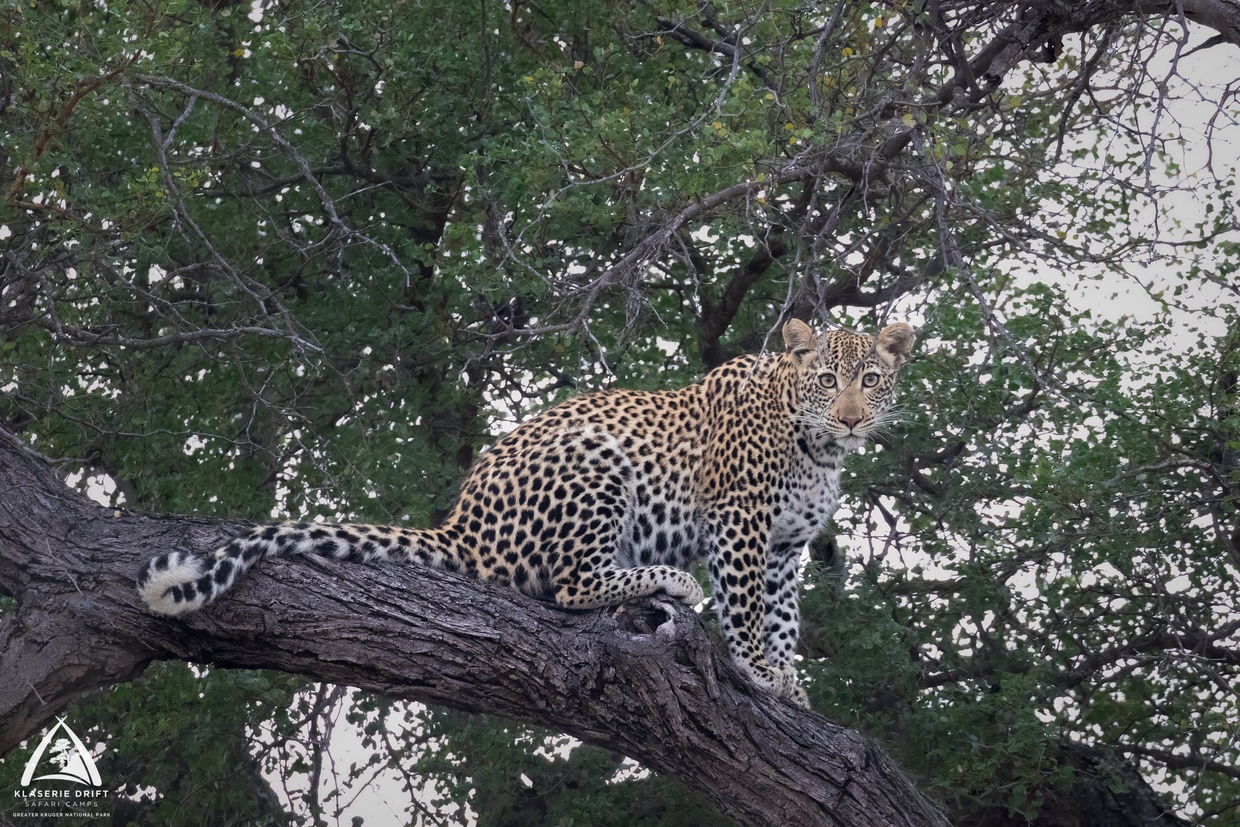 One of Manzi's growing cubs

Other notable leopard sightings include the ever-dominant Pale Male, young female Xivindzi, some fleeting moments with the newly independent Marieps and a special sighting of her mother, the Island female, enjoying an impala kill as a cunning hyena waited patiently beneath. 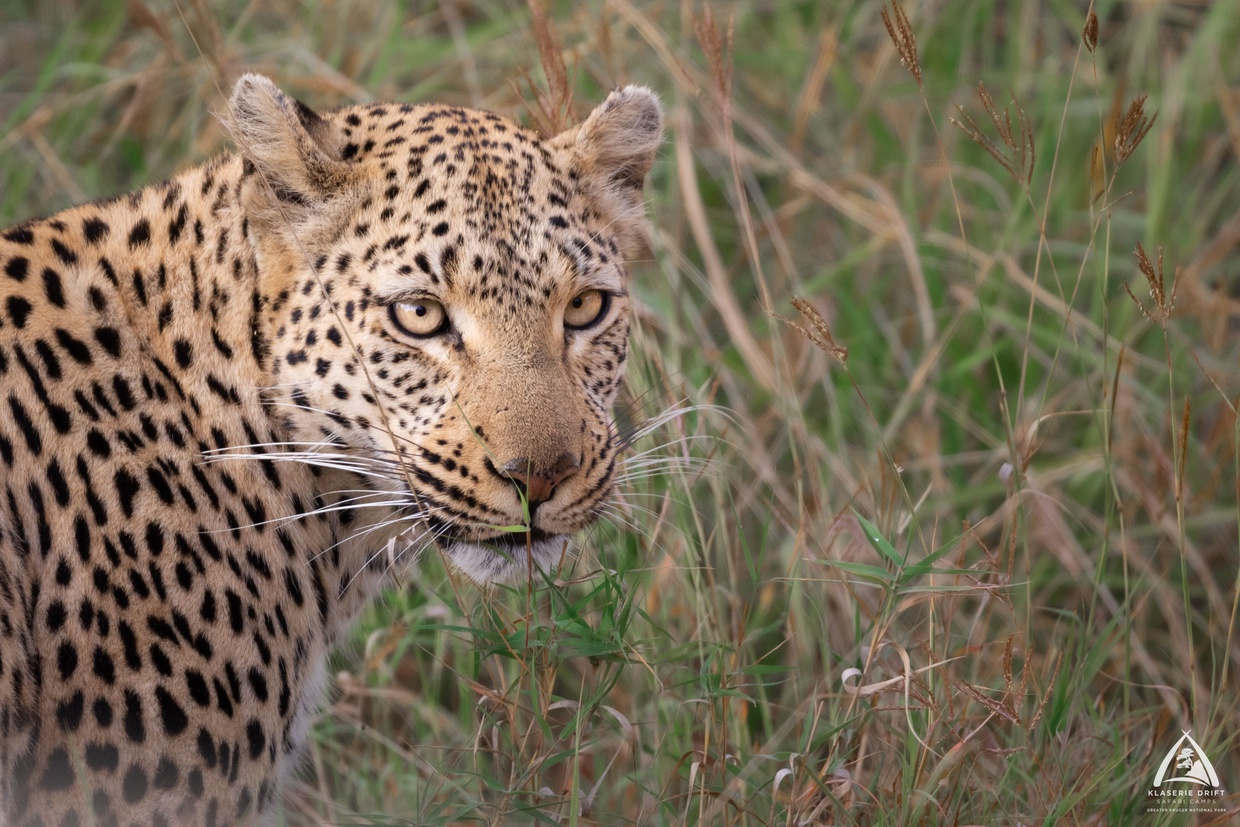 A fleeting backwards glance by Saseka as she continues her patrol

One interesting occurrence last month was the apparent migration of the hippo pod from their normal dam to a section of the Klaserie River close to Misava camp. With water and grass levels high, there doesn’t appear to be a physical need for the change so one theory is some sort of social upset in the pod. A single bull remained at the dam, making us wonder if he isn’t the trouble-maker at hand! 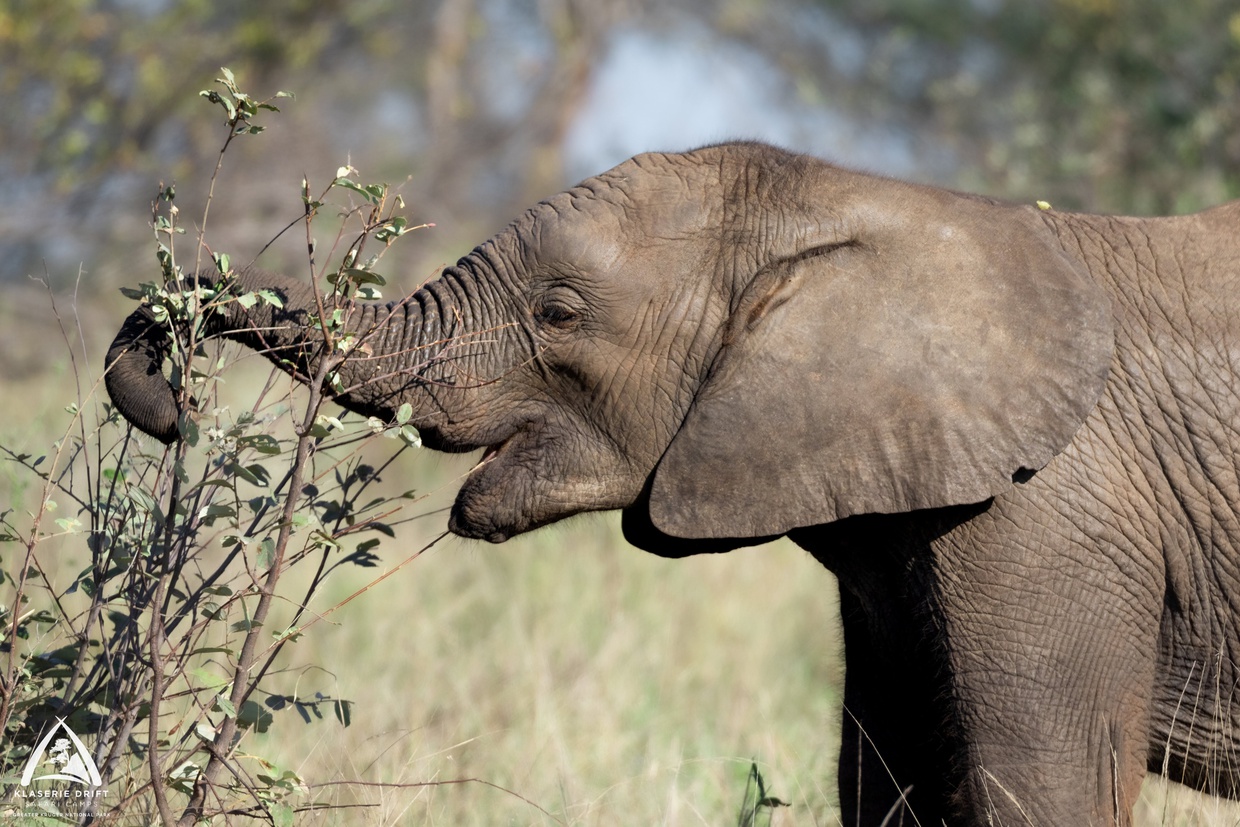 Elephants continue to push through the property in large numbers - with vast herds sometimes coming right up to our waterhole to drink. The large grazers, such as buffalo, rhino, zebra and wildebeest, are enjoying the green grass at such an uncommon time of year and the rutting impala are in full flow - shouting their battle cries for all to hear. Although it has been more quiet of late, the local hyena den is still active with two young cubs - and potentially even a couple more tiny ones hidden deep inside the mound. The tear-away teenagers are now full of all sorts of naughtiness, leaping through the bush to explore everything and anything that moves - an exciting encounter if you can keep up with them! One thing is for sure, despite the onset of winter, the bush abounds with life at every turn - from tiny terrapins to the tallest giraffes - you just need to know where to look!