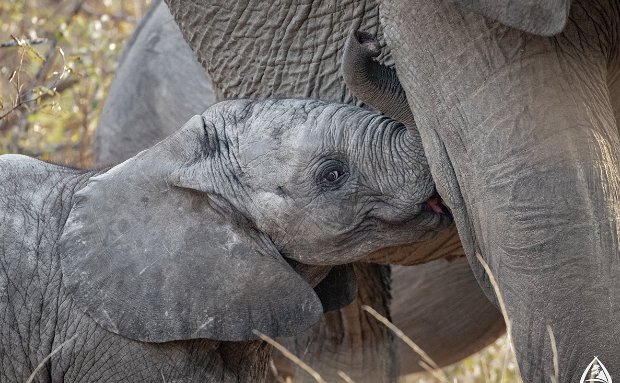 July is traditionally considered a great month for predator sightings in South Africa. Winter coincides with the dry season here in the Lowveld, forcing animals to gather at the dwindling water sources. As the trees surrender their leaves and the grass becomes thin and sparse, it can become easier to spot the elusive leopard or sleepy lion lying up in the bush. No surprise then that we had another bumper month of Big cat sightings! Read on for more... 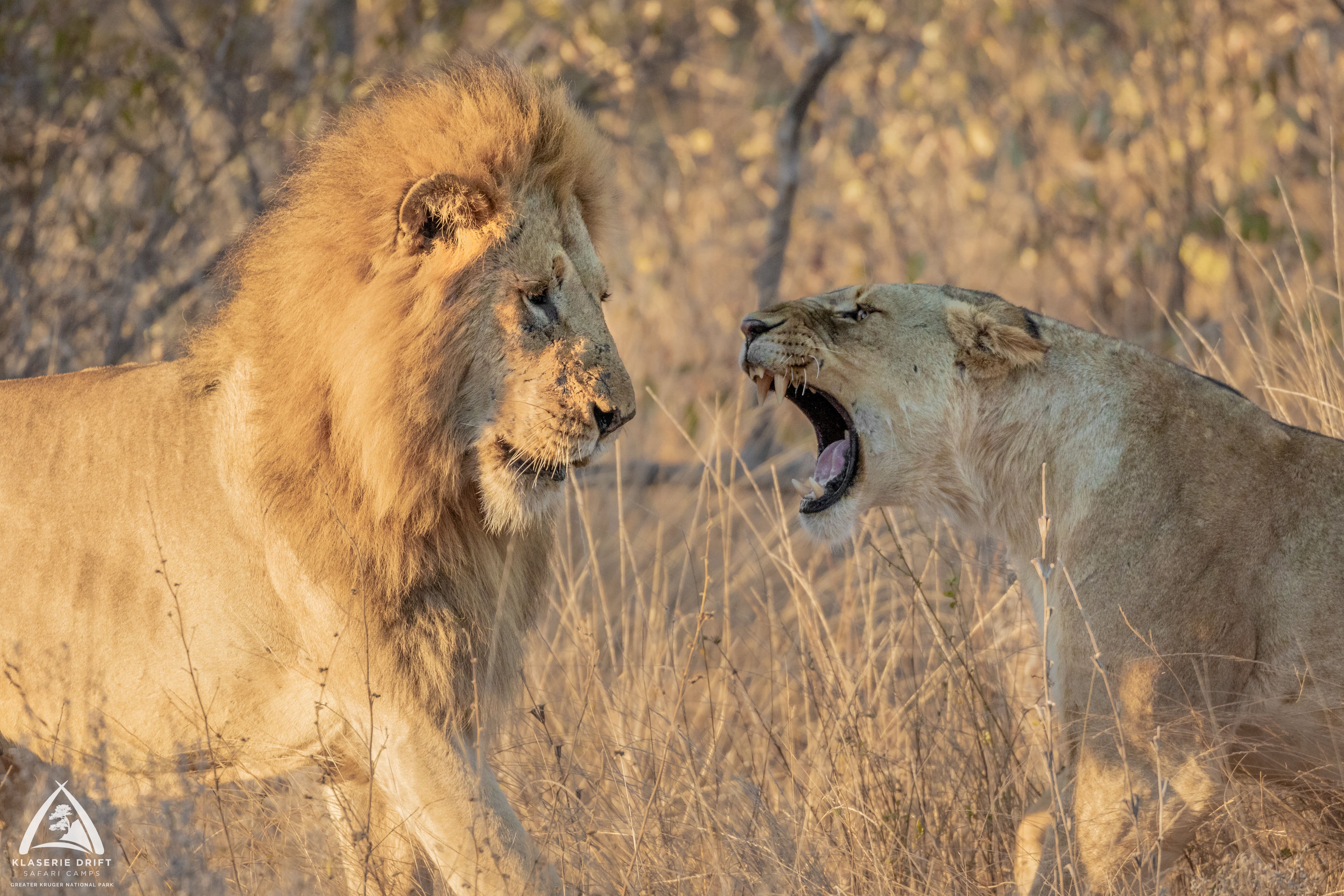 A lioness tells big male Socha to back off!

With lions usually a firm favourite amongst our keen followers and fans, we have to admit that the charismatic leopard takes the prize for this month’s most memorable sightings. As well as some wonderful encounters with the beautiful Saseka, our top mom Manzi has been putting on quite a show alongside her sub-adult daughter - the newly-named Xivindzi (pronounced Shi-vind-zee). Meaning “brave”, we believe Xivindzi is the perfect moniker for our courageous, inquisitive young lady that has continued to capture everyone’s hearts. Yet, as she tentatively steps into her independence, the 20-month-old can’t help but still fall back on her parents for an easy meal.

On one occasion at the start of July, Manzi was spotted happily feeding on an impala kill when Xivindzi turned up begging for scraps. However, Manzi wasn’t tolerating her daughter’s behaviour as she is - incredibly - now nursing a new cub in a secret den! Our guests were thrilled to watch Manzi feeding for almost half an hour before, having eventually had enough, the leopardess walked off to check in on her precious new cargo. Seeing an opportunity, the inexperienced Xivindzi attempted to steal the remains of the carcass and, in doing so, sadly lost it to the waiting hyena below - a tough lesson to learn. 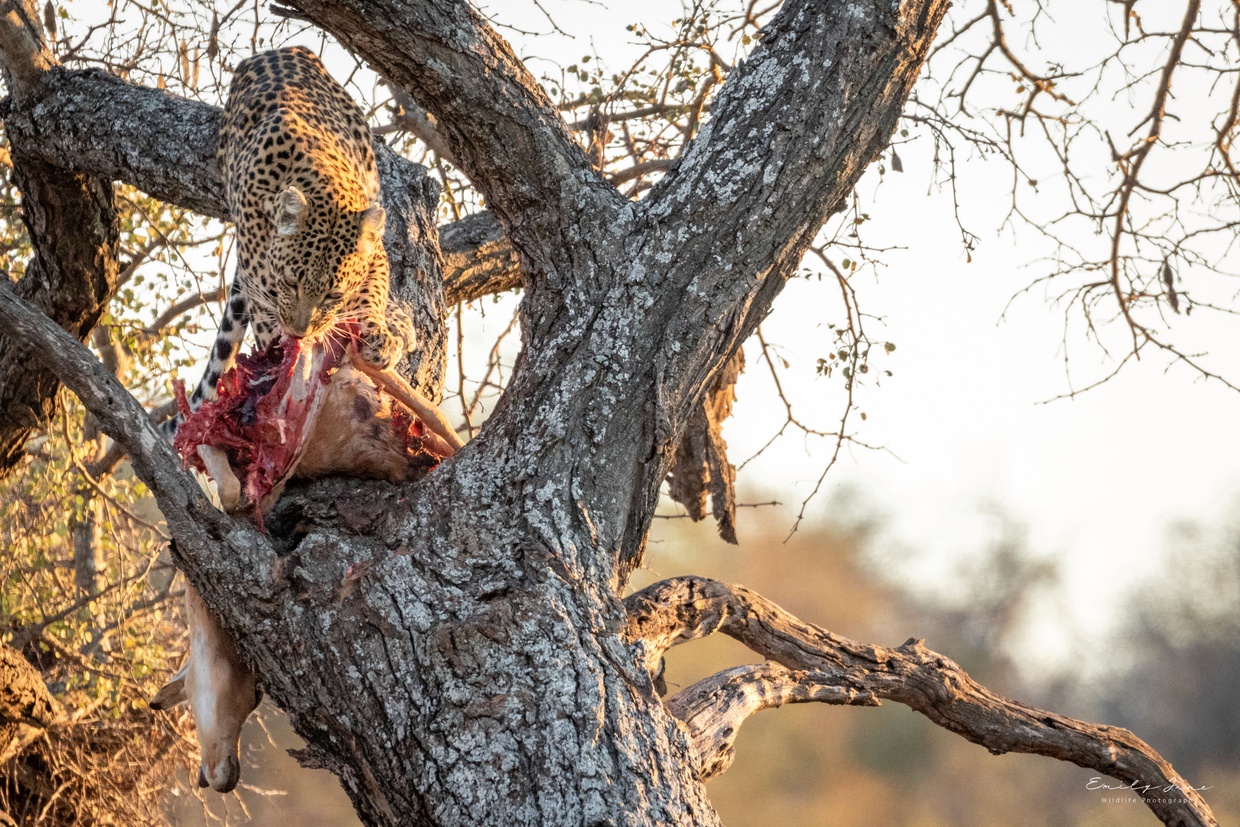 Manzi feeding on an impala kill

Just a couple of weeks later, guide Emily was driving a similar area hoping to spot one of these two incredible females when she noticed a hyena momentarily stare up at a large tree on the opposite side of the river. Suspecting something, she crossed over to explore further. At first, there seemed to be nothing unusual about the tree, however after a closer inspection a pair of bony impala legs could be seen dangling from a branch deep within the leafy canopy. Soon after, the golden tail of a leopard emerged, betraying the Pale Male’s presence. With some crafty positioning, our guests managed to spot the king himself lazily sleeping atop his hard-won prize. Already thinking they had won the jackpot with such an impressive sighting, Xivindzi then turned up again! This time our courageous cub was begging her father for a morsel of meat - not that the Pale Male is known for his sharing attitude. Nonetheless it was a fascinating interaction between father and daughter - something not commonly seen in the wild.

The next morning, Emily and our guests returned to see if the pair were still around and were in for another shock - it wasn’t the Pale Male or Xivindzi but mom Manzi who was now feeding on the carcass! Higher in the canopy, a rattling of leaves revealed Xivindzi still patiently waiting her turn just as the Pale Male returned to claim his meal, reducing her chances of a mouthful back to nil. Unfortunate for our growing girl, but magical for our guests - 3 leopards in a tree at once! For a solitary and secretive animal, such sightings are few and far between so this one will certainly go down in the Klaserie Drift memory books as a very special day indeed. 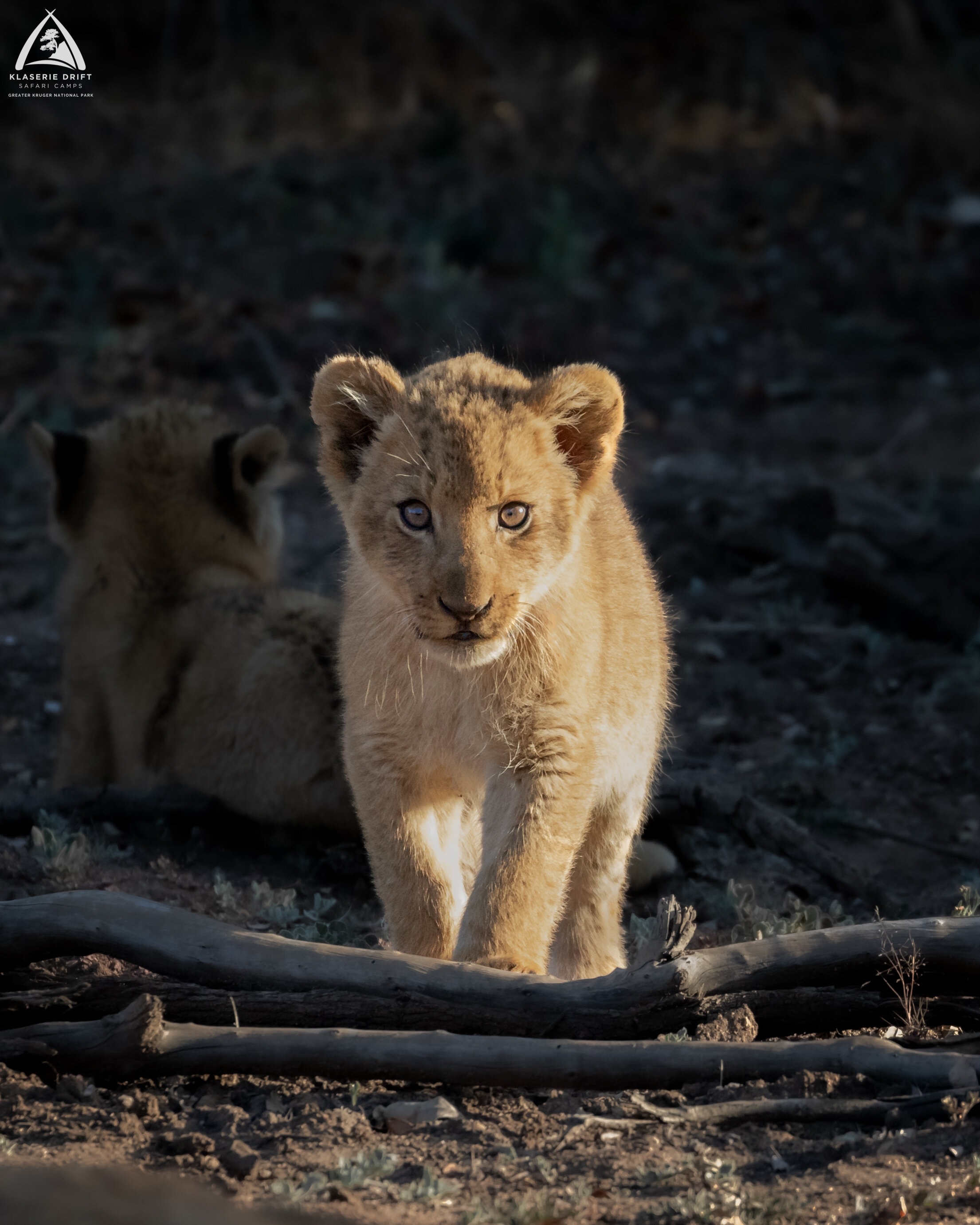 As with June, the River Pride has continued to push boundaries during July, although they did make a reappearance in their trusty homeland around Misava Safari Camp. We are pleased to see the pride has consistently been together over much of the month. That being said, at one stage the males - Hosi and Socha - were spotted expelling the two oldest boy cubs from a fresh kill. At 2 years old now, their time may finally have come to venture out into the wider world.

The other main news from the lions last month was the long-expected presentation of 2 new cubs to the pride. Having seen the males mating with one of the River females some months ago, we were hopeful of adding some more cuteness to the area - and the latest bundles of joy are most definitely that! With 16 older cousins, they have quickly learned to stand up for themselves and are proving confident and rambunctious individuals. Probably already 2-3 months old at their reveal, their mother was wise to keep them safely guarded from so many bossy family members until now. All-in, the pride now stands at 28 individuals - a mammoth number! However, the apparent departure of the two young males relieves a little pressure off the females for now.

With the lack of a denning pack in our traverse this year, we have been fortunate to still see a small pack of 6 individuals roaming the property. Our guests in July have enjoyed a few wonderful sightings of them playing by the river and feeding on the last remains of a fresh impala kill. Sadly, one of the pack is badly injured - likely by hyena - although for now he is being lovingly supported by his pack members. Amazingly, African wild dogs will rarely leave behind an injured dog and in the past we have seen one individual with a severe limp manage to survive for well over a year at the grace of his family members. 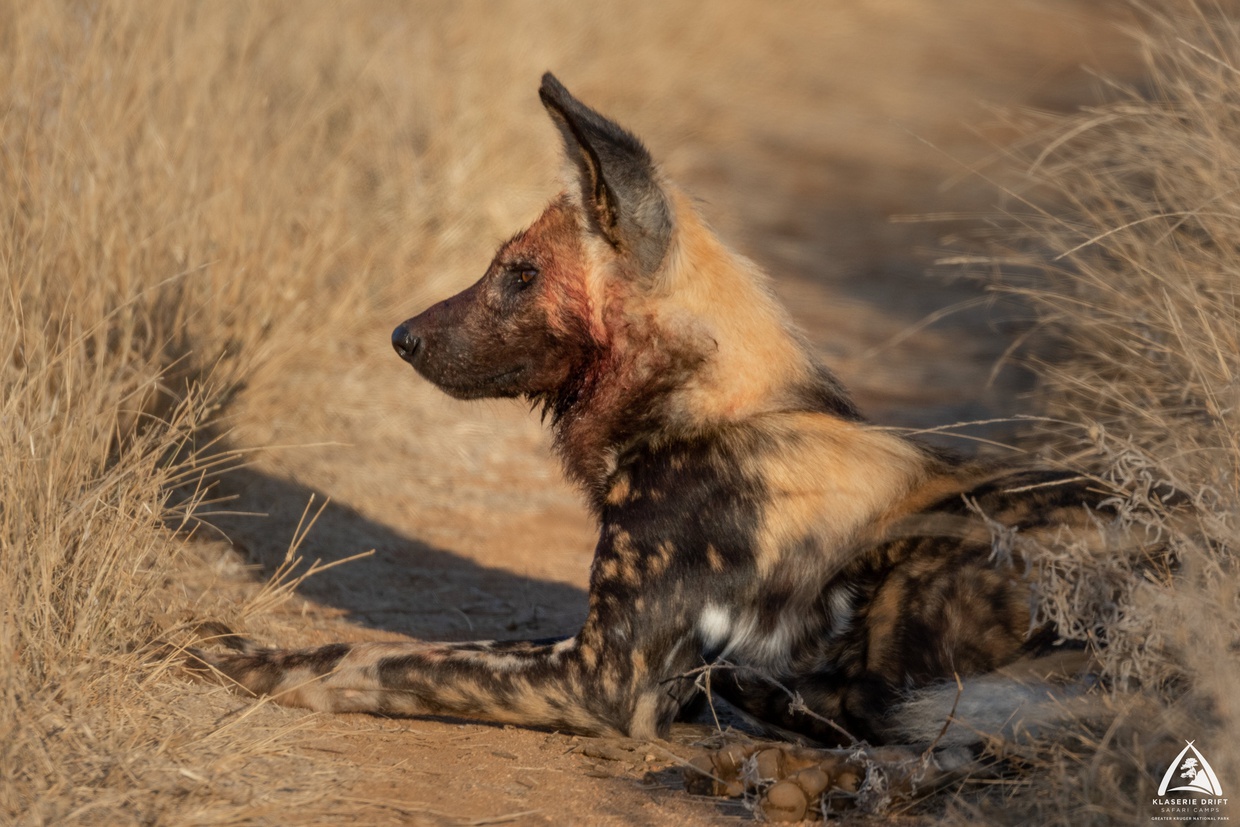 A rare African wild dog bloodied after a recent meal

It goes without saying that the numerous encounters with the majestic elephant continues to enthral our many guests. These gigantic pachyderms have been flocking to the river of late to revel in the Klaserie’s clear waters. Furthermore, there have been small herds of buffalo leisurely grazing along the river’s edge - often right in front of the pool deck at camp, much to the delight of everyone. However, in terms of the big and bulky, there has been one particularly special animal visiting the area this month. A beautiful, male Black rhino - an exceptionally rare creature - has been spotted 3 times in July. Smaller and more secretive than their better-known cousins (the White rhino), these endangered individuals will even get our seasoned guides doing a happy dance after a sighting! It is such a privilege to be able to encounter this magical species in the wild and we hope that he continues to call the Klaserie home. 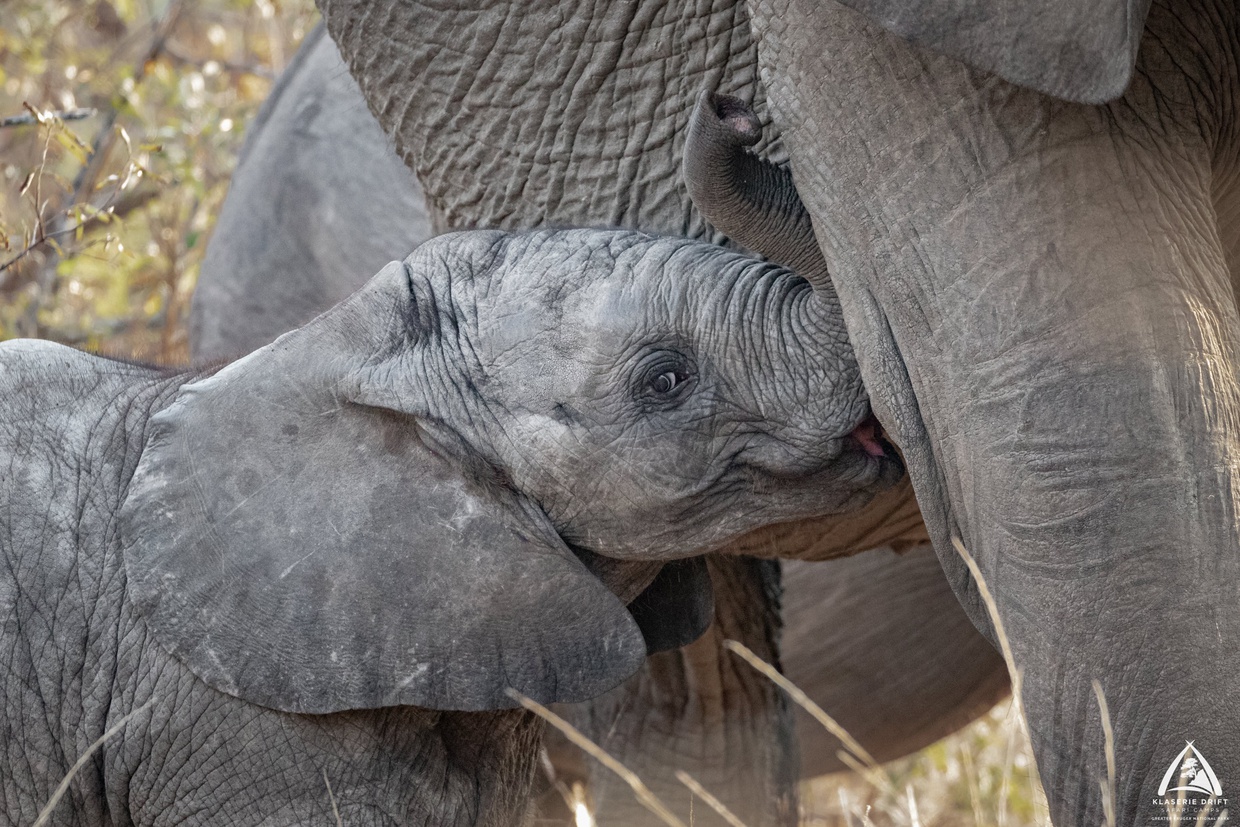