As magical as a Safari can get

We arrived at the camp in the gorgeous African late afternoon light, to encounter an absolute dream of a first safari sighting –2 big male lion kings with their pride, which comprised 3 lionesses and 7 playful cubs! We travelers completely forgot how tired we were after our long journey from Europe and felt instantly recharged by this magnificent scene.

After settling down at Angela’s superb camp, relaxing with a dip in the swimming pool (which, built on a cliff overlooking the river, is probably the nicest in the whole area), we went for a drive and sundowners. Impalas and kudus lined the track as suddenly there came another magic moment. While we were sipping a fresh G&T, a white rhino approached us, getting closer and closer and not detecting us for a long time (we were downwind from him), giving us a most unexpected close encounter with this endangered prehistoric looking beast.

Our first evening meal under the stars at the camp found everyone sharing their initial enthusiastic impressions and listening to the bush sounds carried in by a pleasant light breeze. Every day of our stay was full of adventures.

One day we got a flat tyre, and were faced with being forced to drive right beside 2 male lions resting against the bridge. Elvis, the resident guide, who was on the tracker seat, jumped into the vehicle for a safer passage. The 2 kings whipped around as we passed them, roaring, baring their teeth and flicking their tails threateningly. Adrenalin shot!
Talking about adrenalin, there was more excitement when we got stuck in deep sand about 100m from our pride of lions. After assessing the situation, Brett, our specialist guide, and Elvis suggested that we all got out of the vehicle to push it. Cautiously!

The operation was successful and we had another thrilling and exciting memory to take back home.
We didn’t have long to wait to see my favourite: the leopard. I myself had had to wait 3 years for my first encounter with this beautiful and elusive animal. And it wasn’t just the typical glimpse of a few rosettes disappearing into the bushes. There were several top quality sightings, where we had the scene all to ourselves, the engine was switched off and we could watch the leopard for long periods at a time. Priceless!

We saw 4 individual leopards on different occasions, by day and night. We were able to identify them by comparing our pictures and looking at the spots at the bases of their whiskers. Sometimes we saw them hunting at night, or strolling past during the day, climbing a tree, drinking at the dam and, on our last day, we had the extreme good fortune of seeing 2 leopards together. According to Elvis they were a brother and sister who have started their individual lives but sometimes come back together.

Probably the most spectacular sighting was of a young female leopard who climbed a huge Leadwood tree. She hadn’t realised that the tree was far too big for her. Nevertheless, she gave us an amazing show. She climbed up and laid on a branch, striking a perfect relaxed pose for photographers. Eventually, she realised she had to get down, but didn’t seem to know how. She considered all her options, of which there were none except to back down in reverse gear! Awesome spectacle.

The next day, we spotted her drinking at the dam. She ambled around our vehicle several times, allowing some excellent close-up shots for people taking photographs of her with their….. mobile phones!

Elephants, those great African icons, also granted us some entertaining encounters. They are never boring to watch. We came across a nursing herd with the youngsters playing hide and seek in the bushes; so funny. However, the Matriarch of the herd, suggested strongly that she might charge at us if we didn’t keep our distance from her little one! Even the hint of a charge from a huge 6-ton animal sharpens the mind somewhat and everyone in the vehicle got the message immediately and behaved accordingly!

Goose bumps flared up again when watching a lioness calling for her cubs. She had left them alone to go hunting at night and came back in the morning to fetch them. Hearing her call, the cubs started running like mad towards their mummy, jumping at her with their beautiful loving enthusiasm which touched us all.

One afternoon in the river bed, a herd of impala suddenly started alarming. A lonely buffalo, who was there grazing peacefully, realised that the alarm wasn’t for nothing and urged toward the bank. The impalas all zoomed off too and it was then we noticed the presence of a big male leopard lying in the shade, watching the world go by or, more likely, watching snacks go by! Fantastic!

But not everything is about the big 5 and we enjoyed seeing and watching all the antelopes and smaller mammals, as well as the many nocturnal creatures. We also took walks and studied animal tracks, learning to read the bush and trying to understand more about the ecosystem and the interactions between all the different species.

The birdlife was also a constant delight throughout the safari. We identified over 80 species and enjoyed learning how to recognise them by their calls. One of our challenges was to photograph the Lilac Breasted Roller in flight: success!
We had to wait until nearly the end of our stay before we got to see our first giraffe, also one of the most wanted on the safari first-timers’ shopping lists! We had our first sighting in a lovely sunset light. What more can you ask for, I wonder!

There was one other, most unexpected event. Elvis and Brett had been getting very excited for the last 3 days after noticing the presence of black rhino dung on the white rhino’s “toilet spot”. So we were cruising along on our last morning drive when suddenly Elvis shouted: black rhino! The beast was running in the river bed. We tried to get closer but he tended at first to run away from us. Suddenly he decided enough was enough; “I’m gonna challenge them”, he must have thought. He appeared from around the bushes, facing us, festooned with several oxpeckers on his body. As he stood before us, we had no idea if he was going to charge or not. We watched each other like this for a couple of minutes, enjoying what was for everyone an extremely rare sighting. That was the cherry on the cake, incredible!

Elvis said the animals had been good to us. We had had the most extraordinary safari we could have hoped for. Thanks to our very special guides, Brett and Elvis, thanks to the great management and all the friendly and efficient staff of the Klaserie private game reserve and Angela’s stunning camp.

It certainly has be one of the great experiences of a lifetime, lasting long in everyone’s memory. 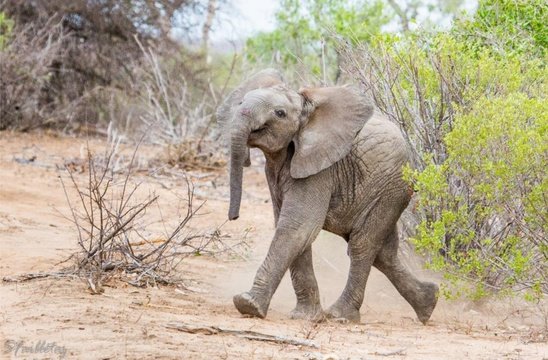 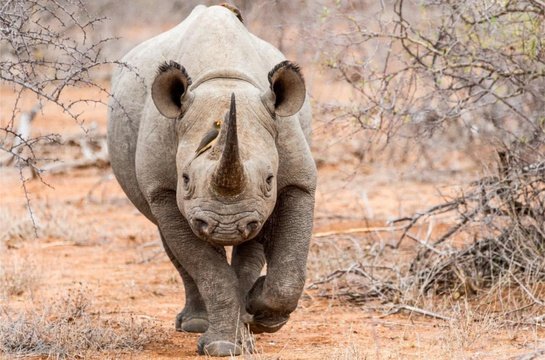 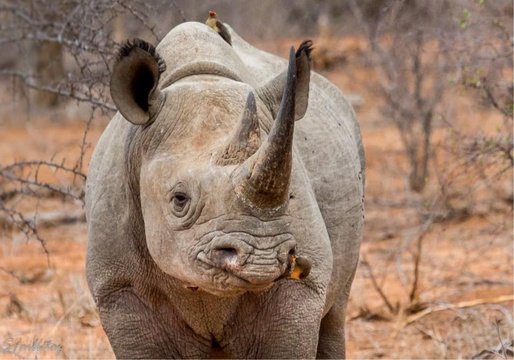