Some unexpected late showers brought a burst of life to the bush during April, sprinkling the veld with a new, green growth amongst the drying, yellow grass. The male impala have begun ramping up their singing voices as they entered the annual rutting season, flushing the savanna with their throaty bellows as they seek to dominate over their rivals. Amongst all the commotion, our plentiful predators quietly raise the next generation - with leopard, lion and hyena cubs all featuring in the month’s top sightings. Keep reading to find out more.

A small breakaway of the River pride, consisting of 3 females, 1 sub-adult male and 1 sub-adult female have been sticking close to the Misava property throughout much of April, much to our guests’ delight. Their reluctance to wander far is due to two of the females showing signs of nursing cubs. However, the youngsters hadn’t been seen since early March as the new den-site was in an area difficult to access by vehicle. Our luck did eventually change and the site was relocated once more during late April and guides Matt and Khutso were finally rewarded with several days of thrilling sightings of the 3 cubs, still thriving under their mother’s attentive care. 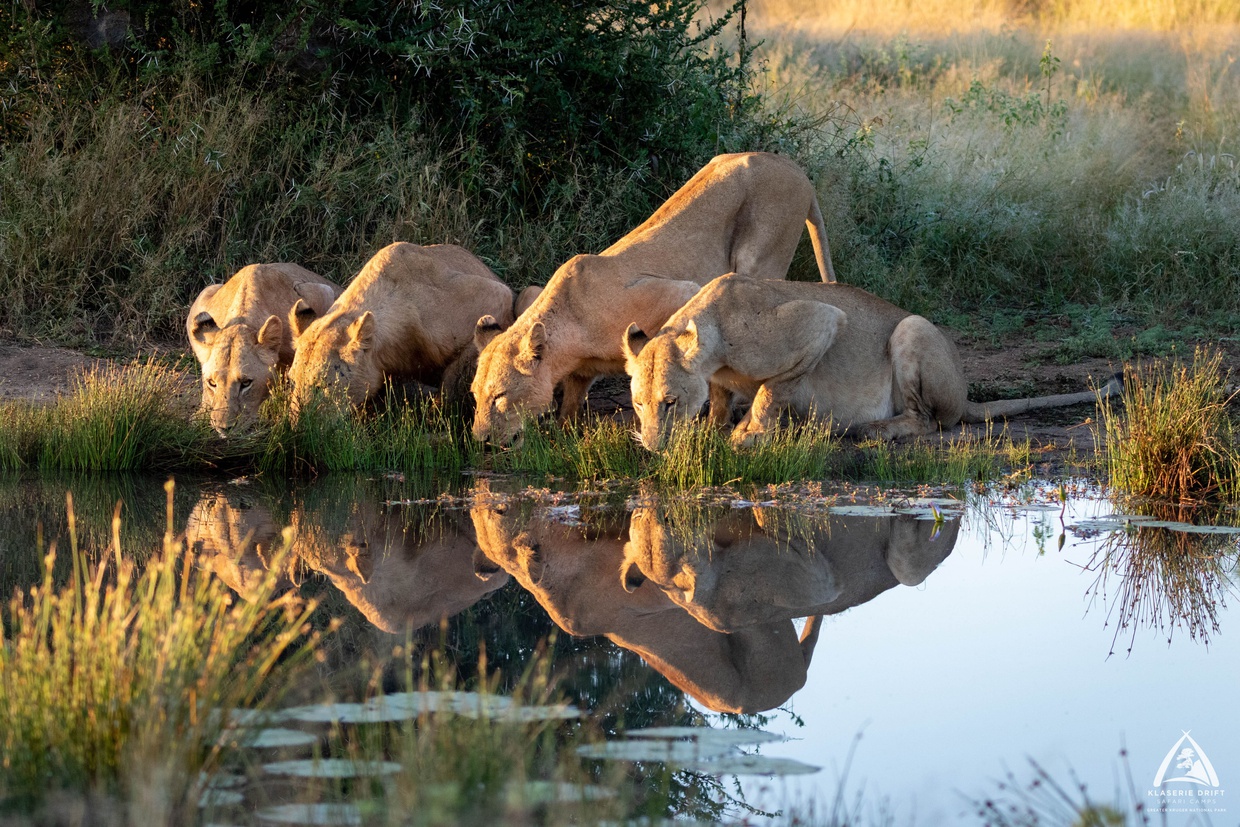 Part of the River pride breakaway taking a drink

The same breakaway group was spotted many times attempting to hunt and, at one stage, guide Emily was enjoying a relaxed sighting of the pride sleeping in the late morning when a couple of African wild dogs suddenly appeared. One lioness immediately shot up and began to stalk the pair, although they quickly realised the danger and ran off, initiating a thrilling chase. Happily, the dogs were too fast and the lioness returned to her slumber whilst the dogs darted east, eventually reuniting with the entire pack of over 25 animals.

Manzi and her two cubs proved themselves superstars of the Klaserie once again in April! Beginning the month with an impala kill, the incredible mother shows no sign of slowing down when it comes to providing for her hungry offspring. Amazingly, she was even spotted with a young waterbuck kill which lasted the family 3 blissful days - perfect for our lucky guests! 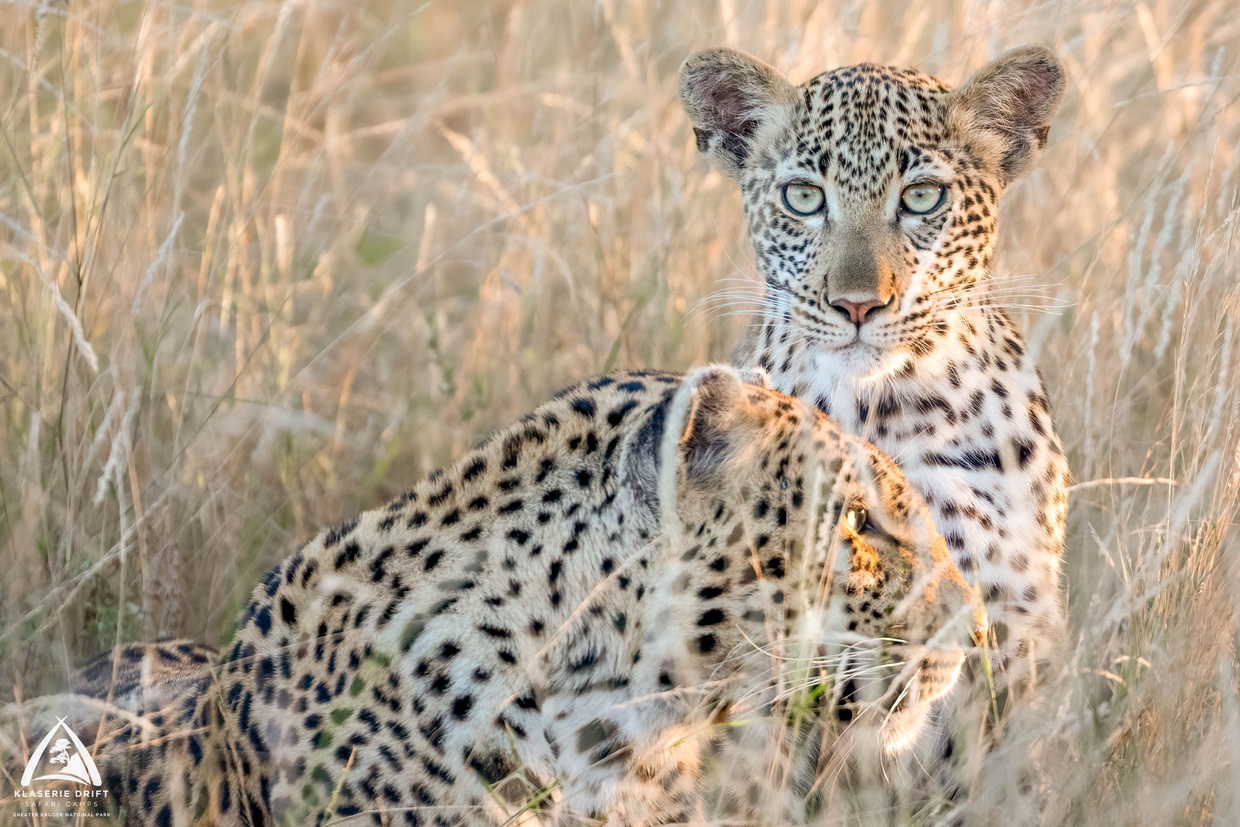 Manzi and one of her cubs

The Island female was spotted on a couple of occasions with her daughter, Marieps, although we are also seeing the two separate more often now as Marieps slowly ventures into independence. On one particular safari, guide Emily was busy watching a herd of elephants in the river when, all of a sudden, both leopards appeared from behind a rock, having been flushed out by a passing bull! It transpired the pair had an impala kill in the cliffs close to Misava, although the herd of elephants promptly caused them to abandon the last scraps of meat. Xivindzi, the Pale Male and several other unknown leopards were also spotted on safari with Klaserie Drift in the last month. 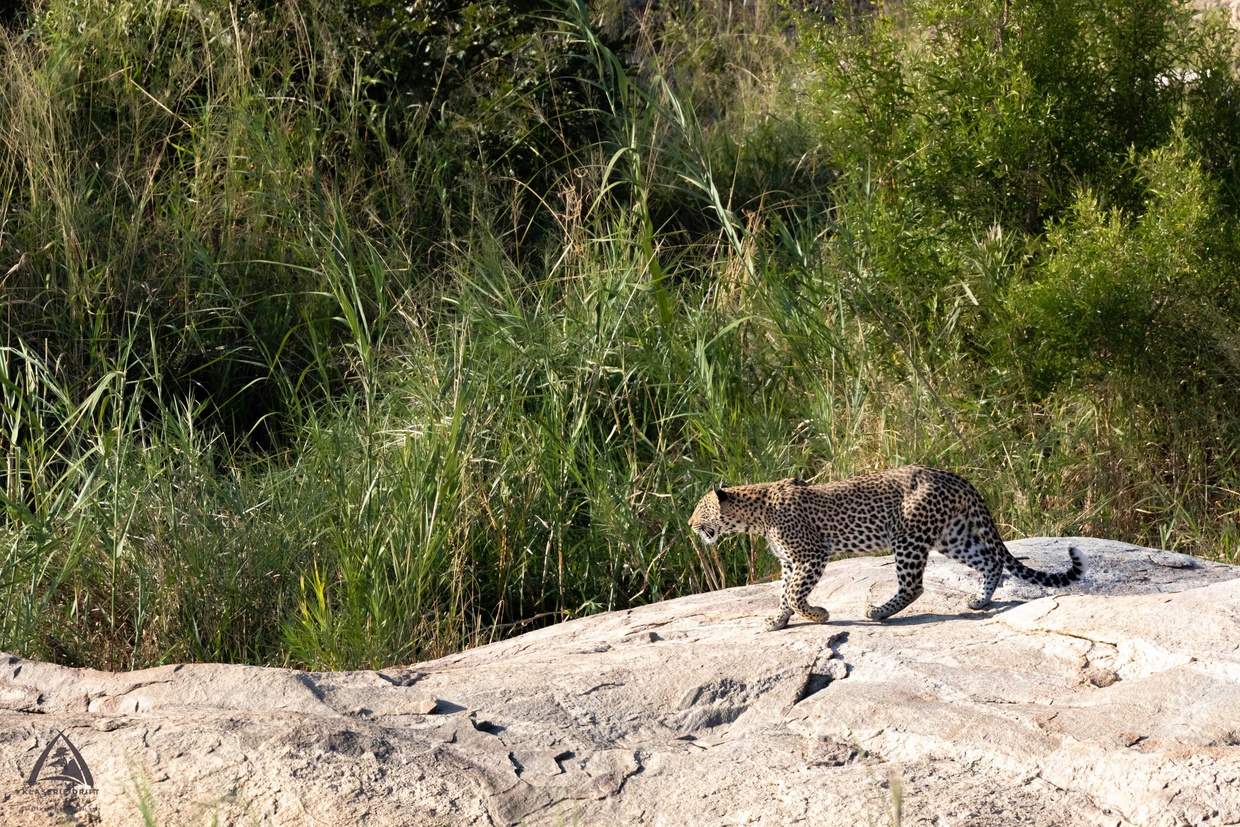 Marieps follows her mother away from the angry elephants

As well as the aforementioned sighting of African wild dogs bumping into some sleeping lions, there were a couple of other wonderful encounters with these endangered carnivores in April. Despite losing one of their yearling pups last month, the pack seems to have rebounded well - truly, it is amazing how resilient these charismatic creatures can be. 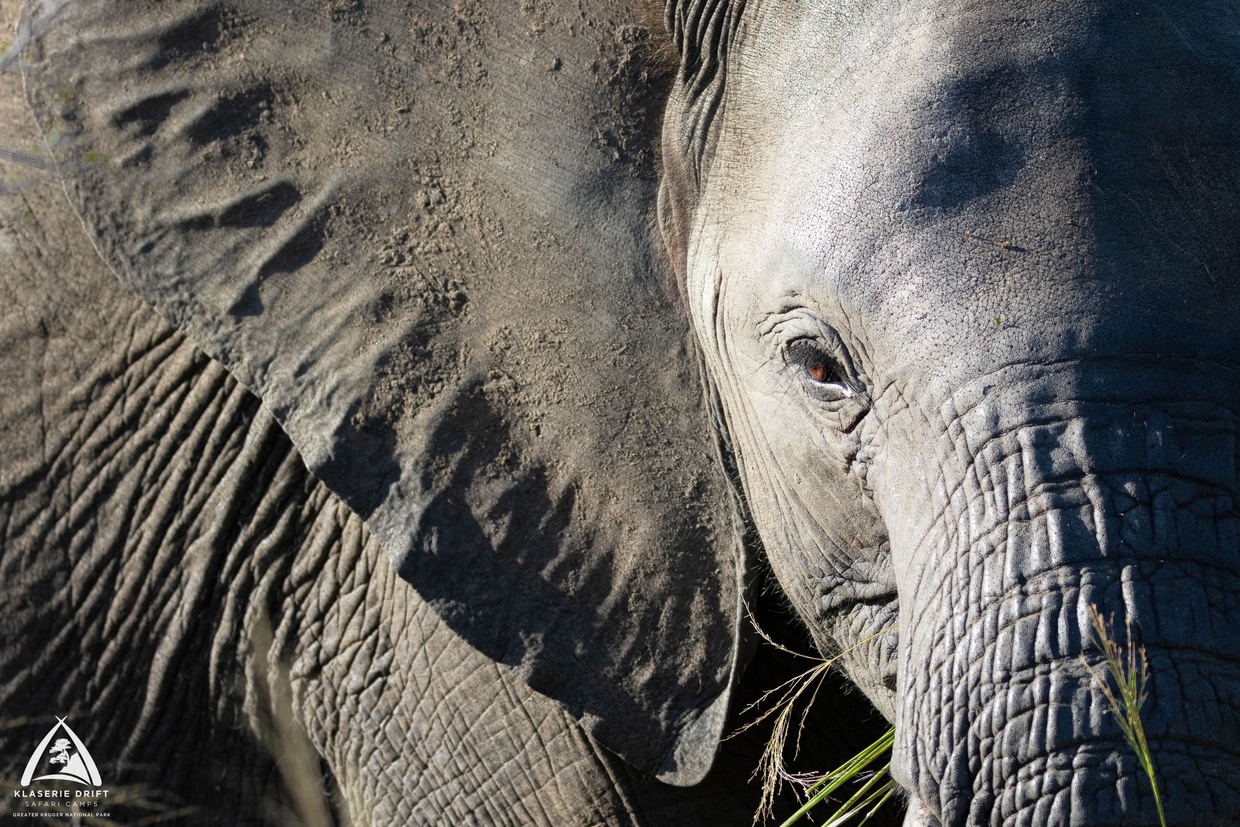 Although elephants are a year round feature at Misava, they are particularly numerous during the dry winter months owing to our position right along the Klaserie River. As with previous years, we have noticed the herds temporarily come together into ever larger family groups as they descend upon the river, with one such sighting resulting in our game vehicle being totally surrounded by over 50 elephants for at least 20 minutes! The two tusker bulls have also been present during April as well as the welcome sighting of a big buffalo breeding herd over several days. 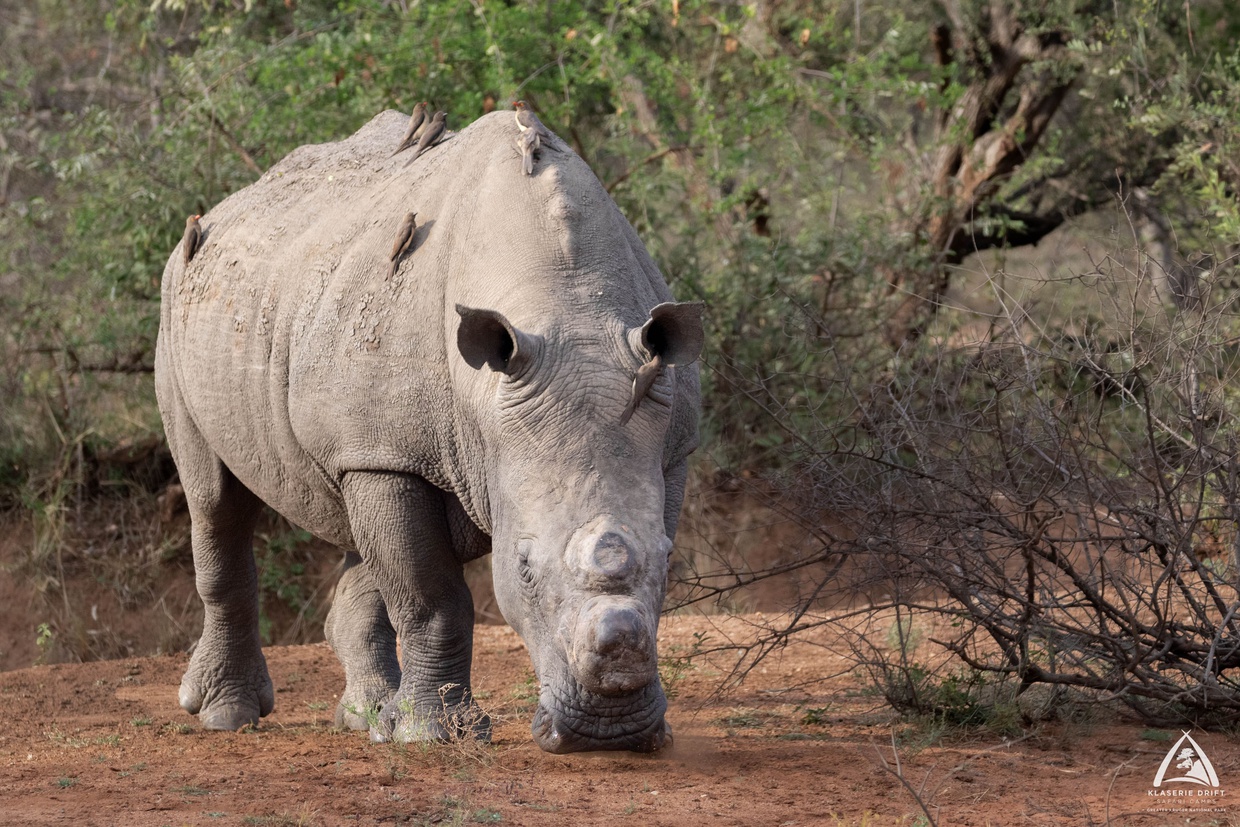 One of the Lowveld’s rarest large animals, the highly endangered black rhino, was spotted 3 times alongside his larger cousin, the white rhino and the cheeky hyena cubs continue to thrill and delight with their playful antics at the den. On one evening as guide Emily approached the den, she noted a huge amount of vultures nearby and went to investigate. It later transpired that a young giraffe had somehow expired there a few days earlier, providing a veritable feast for the growing family. Overall, it was another wonderful month in our little piece of paradise on the Klaserie River.

Welcoming new little ones in the hyena clan